AAV.SPR ensures gene delivery
to large areas of the retina and safe delivery to the fovea

One of Atsena’s novel spreading capsids, AAV.SPR, is being utilized in both the company’s X-linked retinoschisis (XLRS) program and USH1B program. Development of AAV.SPR stemmed from the need to achieve therapeutic levels of gene expression in photoreceptors of the central retina while avoiding the surgical risks of foveal detachment. 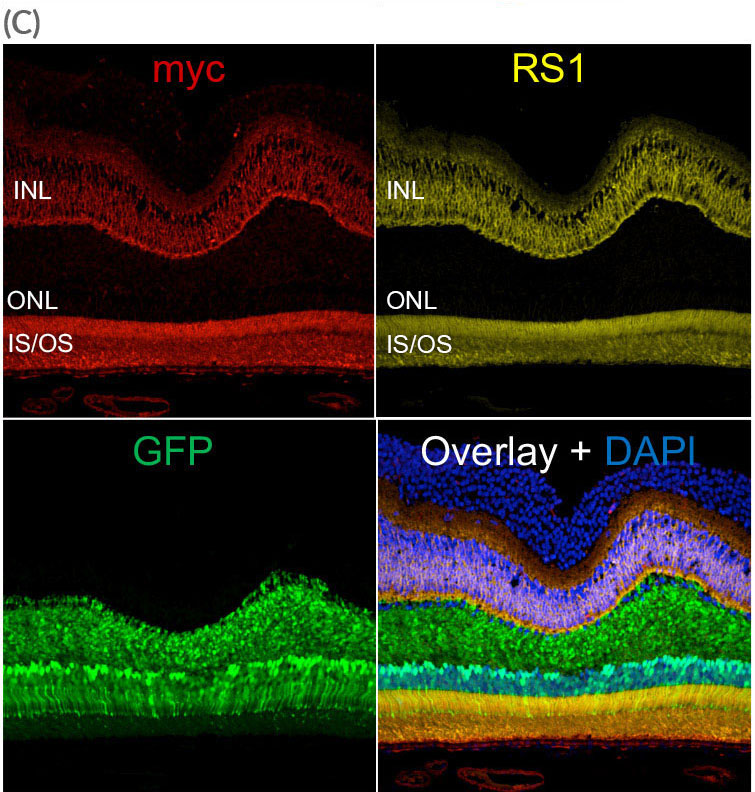 AAV.SPR containing either myc-tagged human RS1 [AAV.SPR-RS1(myc)] or green fluorescent protein (AAV.SPR-GFP), both driven by a photoreceptor specific promoter were co-delivered at a concentration of 6.6e11 vg/mL. AAV5 vectors containing identical constructs were used as a control.

Eyes received either a single 100 µL bleb placed superior to the macula, or two 50 µL blebs placed superior and inferior to the macula (retinotomy sites delineated by yellow arrowheads). The location of injection blebs relative to the macula and GFP fluorescence over time were captured by confocal scanning laser ophthalmoscopy (cSLO). Borders of original blebs on day-of-dosing were confirmed by OCT and are outlined in yellow. AAV.SPR-mediated GFP expression was seen well beyond the margins of the injection blebs and expression increased over time. Foveal transduction was achieved following placement of either one or two injection blebs. In contrast, AAV5-mediated GFP remained confined to margins of the original bleb, and no foveal transduction was achieved.

Widefield image of retinal cross section (taken from AAV.SPR treated eye in A) reveals widespread AAV.SPR-mediated GFP and myc expression. White box in (B) is magnified in (C).

AAV.SPR mediated GFP expression was found in the majority of foveal cones despite this region remaining fully attached during surgery. AAV.SPR-mediated myc (RS1) expression (red) localized properly to photoreceptors and the INL, and colocalized with endogenous RS1 expression (yellow).

AAV.SPR restores retinal structure and function over the long term to a mouse model of XLRS

This website uses cookies to improve your experience while you navigate through the website. Out of these cookies, the cookies that are categorized as necessary are stored on your browser as they are essential for the working of basic functionalities of the website. We also use third-party cookies that help us analyze and understand how you use this website. These cookies will be stored in your browser only with your consent. You also have the option to opt-out of these cookies. But opting out of some of these cookies may have an effect on your browsing experience.
Necessary Always Enabled
Necessary cookies are absolutely essential for the website to function properly. This category only includes cookies that ensures basic functionalities and security features of the website. These cookies do not store any personal information.
Non-necessary
Any cookies that may not be particularly necessary for the website to function and is used specifically to collect user personal data via analytics, ads, other embedded contents are termed as non-necessary cookies. It is mandatory to procure user consent prior to running these cookies on your website.
SAVE & ACCEPT

Accessibility
Text Size
A
A